I wanted to share the DIY Ramadan decor I've got ready so far. 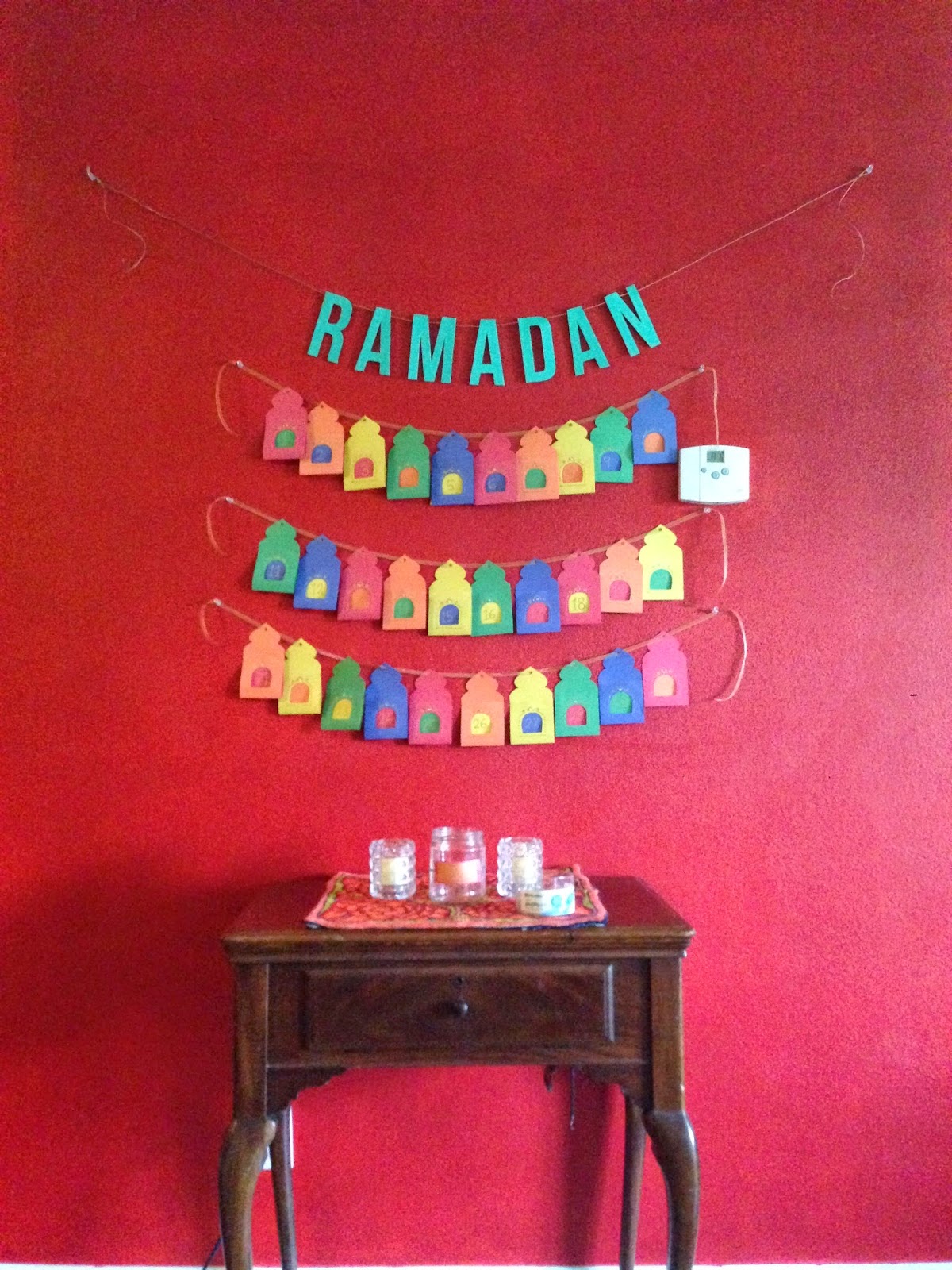 I have a lot of homework to do, so naturally I decided not to do it and make this stuff instead. Seriously, though, I didn't end up doing any kind of Ramadan or Eid decor last year, and I didn't really care much either because N was only 2 years old. She's 3 now, and a lot more aware of what's going on, and I do want her to be excited and pumped up about this so I was pretty determined to be on time with the decor this year.

I knew I wanted to do a banner, and I wanted the elements of the banner to be able to hold a small note stating a simple task for N to do or help with everyday, so she could 'earn' a small reward. I know a lot of people do a daily gift or treat for the children everyday, and I wanted to do something along those lines as well. I also wanted the banner to indicate what day of Ramadan it is. I ended up picking one of my favorite 'mosque' shapes, and using that for the banner elements. It was supposed to be one long banner but I divided it into three levels because of wall space and logistics, and I think it looks great that way and works with the whole first, second and last ten days of Ramadan concept.

Honestly, I did not want to go out and buy any art supplies, so I worked with what I had, and that's what I'm going to show you here. With crappy iPhone photos taken at night, by the way. I did most of this at night, so I apologize for the quality of a lot of these pictures.

I started by picking out 2 sheets of construction paper in 5 different colors [red, orange, yellow, green, blue], which is a total of 10 sheets of paper. I cut each sheet of paper width-wise into 4 3-inch strips, so I ended up with 8 strips of every color. I only needed 6 strips each at this point, so I put the others aside. Using my X-acto knife, I cut the 'mosque' dome shape out of the top of the strips, as well as a 'window' on the bottom section of the strips. I tried to make this process easier by making a template, stacking about 4 or 5 strips together, tracing my shapes to the top one and cutting through all of them in one go. Yes, my hand did hurt by the end of the night. No pain, no gain. 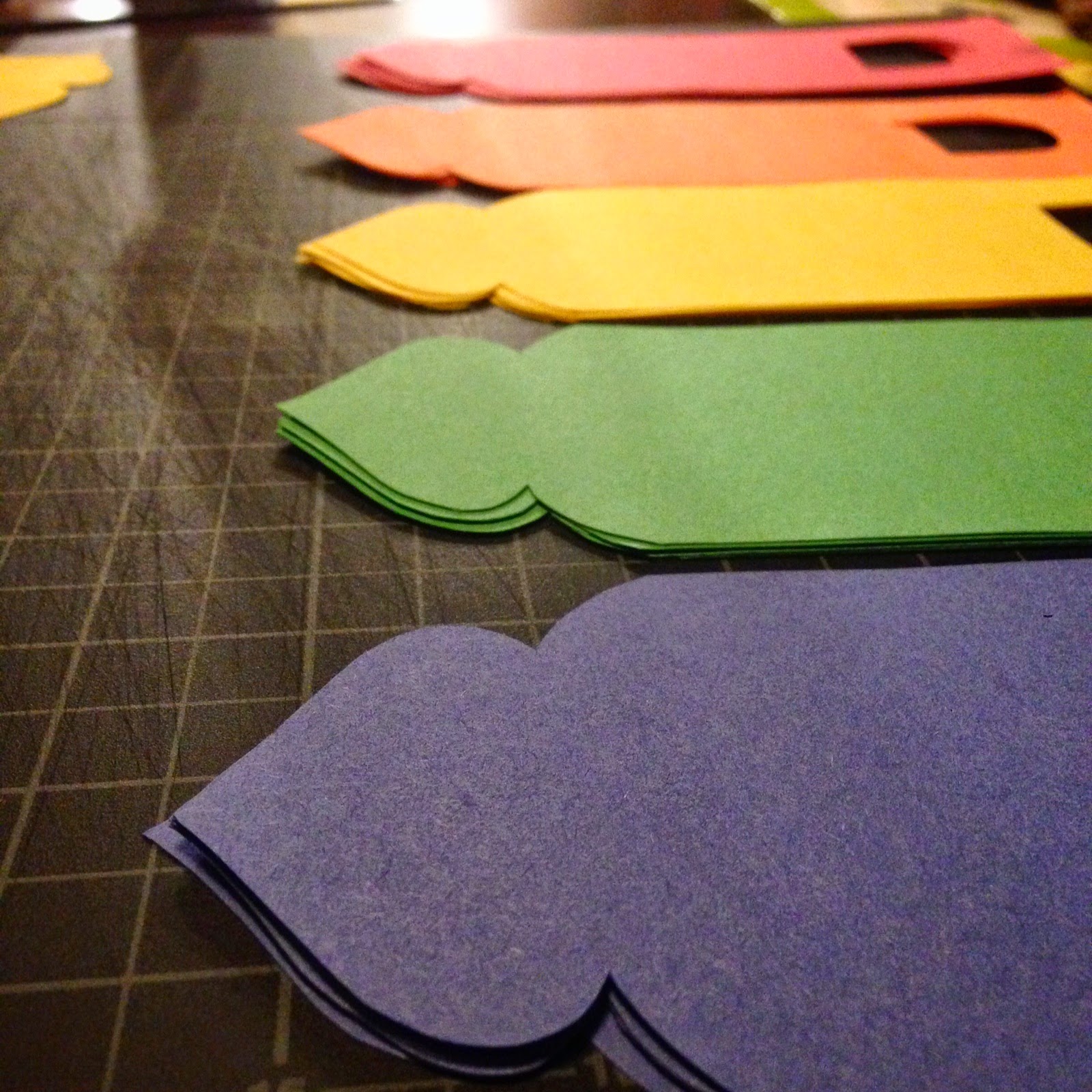 Once this was over, I folded each strip 3 inches from the bottom up, so that the window came up to the middle of the 'mosque'. Next, I took the leftover window cut-outs and started gluing them inside the mosques. I used different colors, so that the inside of the window would be a different color than the mosque itself. I then glued the front flap onto the main mosque body, by putting little dots of glue on the bottom two corners only, so that I was left with a 'sleeve' to put my notes into. I took my template/experimental mosque apart to explain this a little better to you: 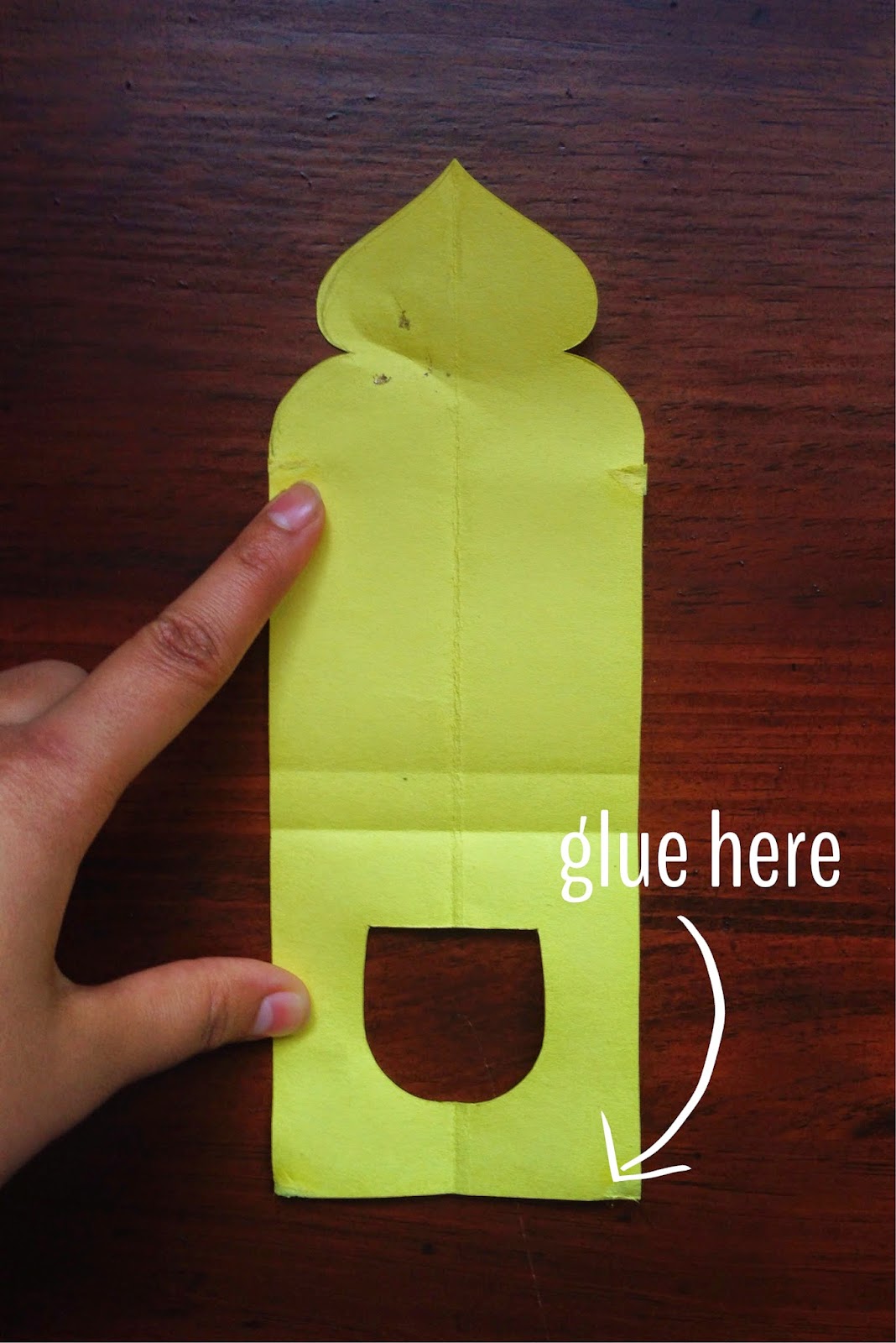 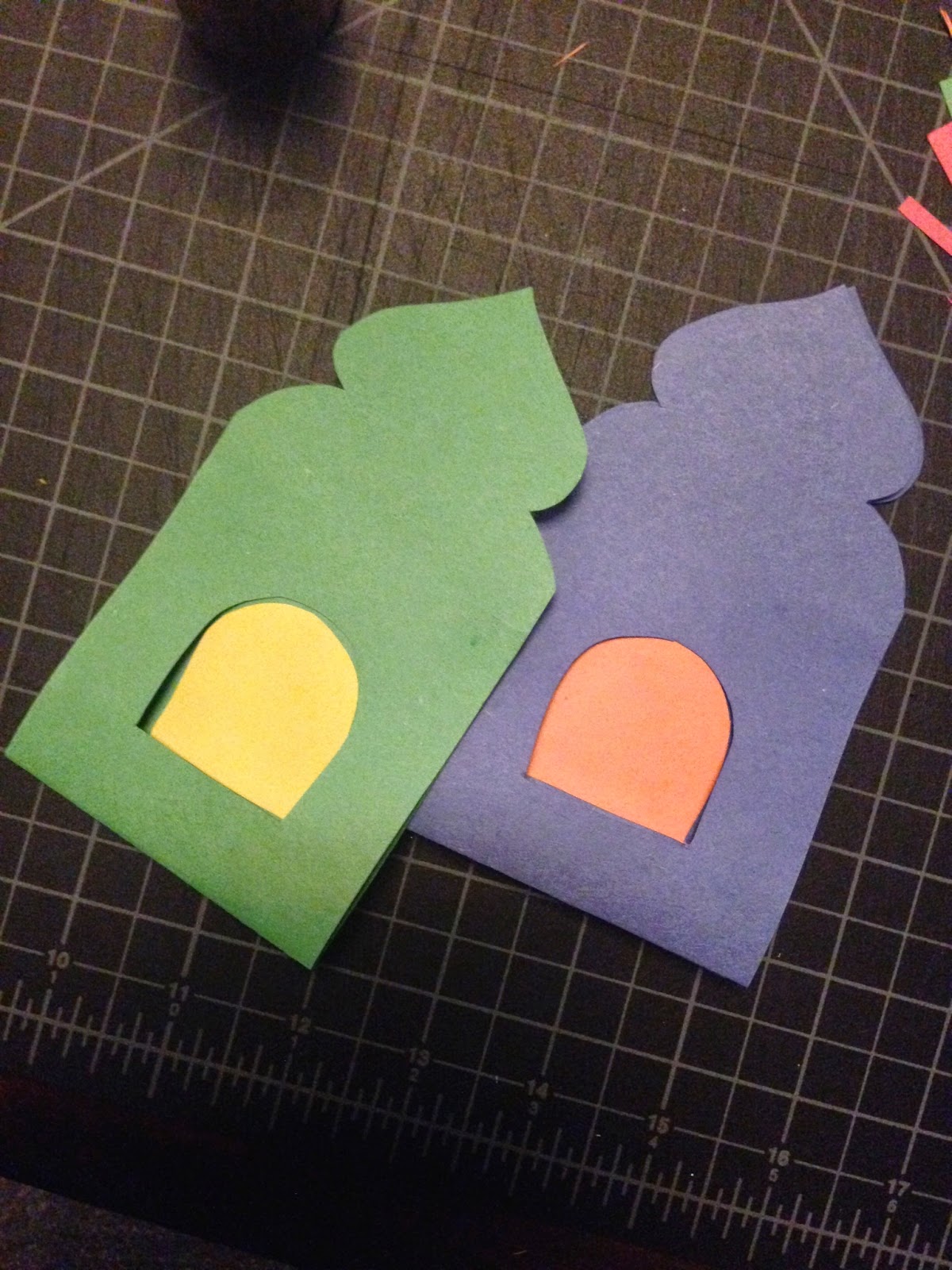 I found a bottle of gold paint with a fine tip, and used that to decorate my mosques. I realized as I took this picture that it says it's glass paint. Oh well? I also put some adhesive gems on each mosque, just because I found them lying around. I also stacked a bunch of the mosques together at a time and punched holes in the top of the dome, so I could string them into a banner. 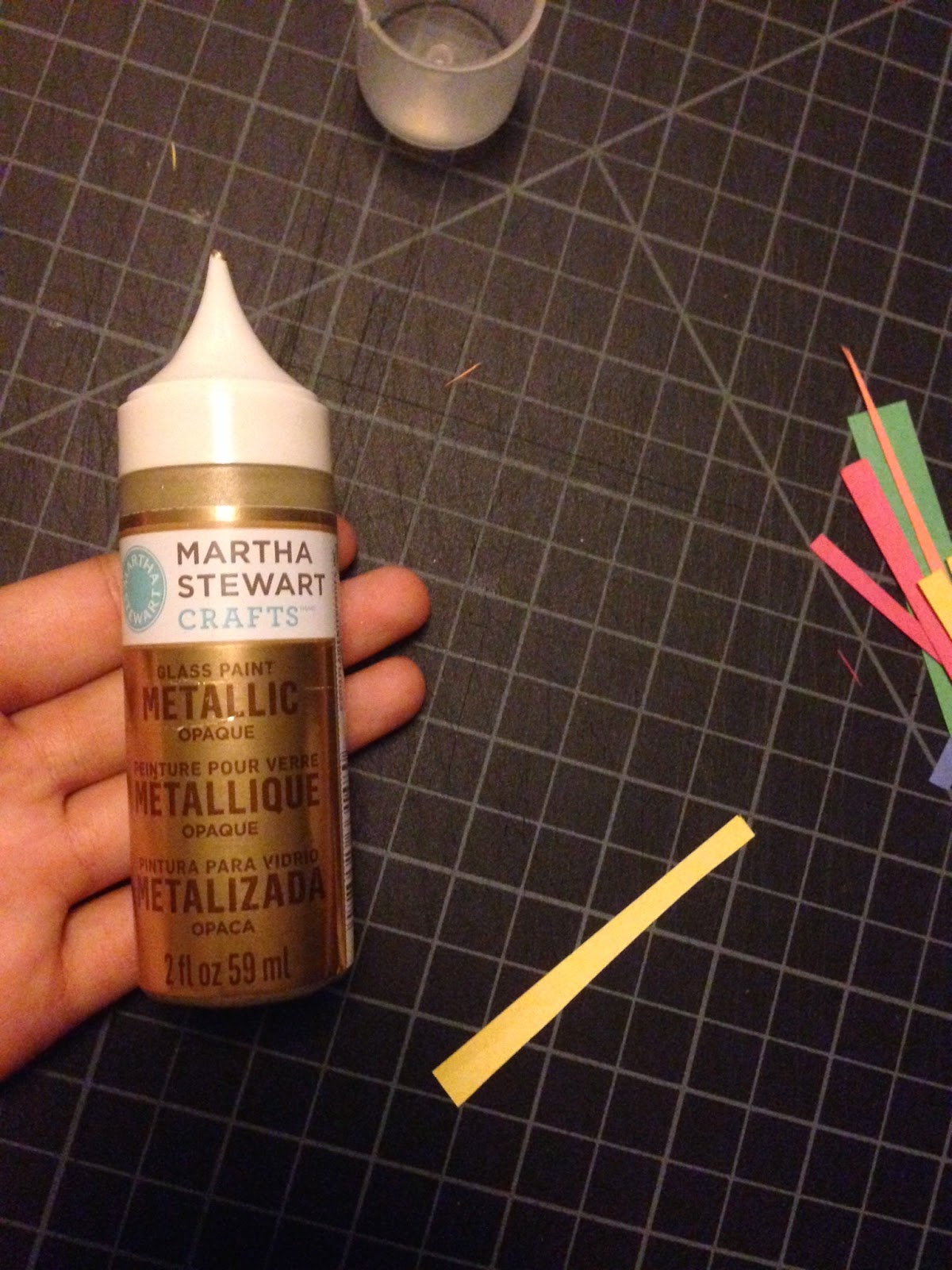 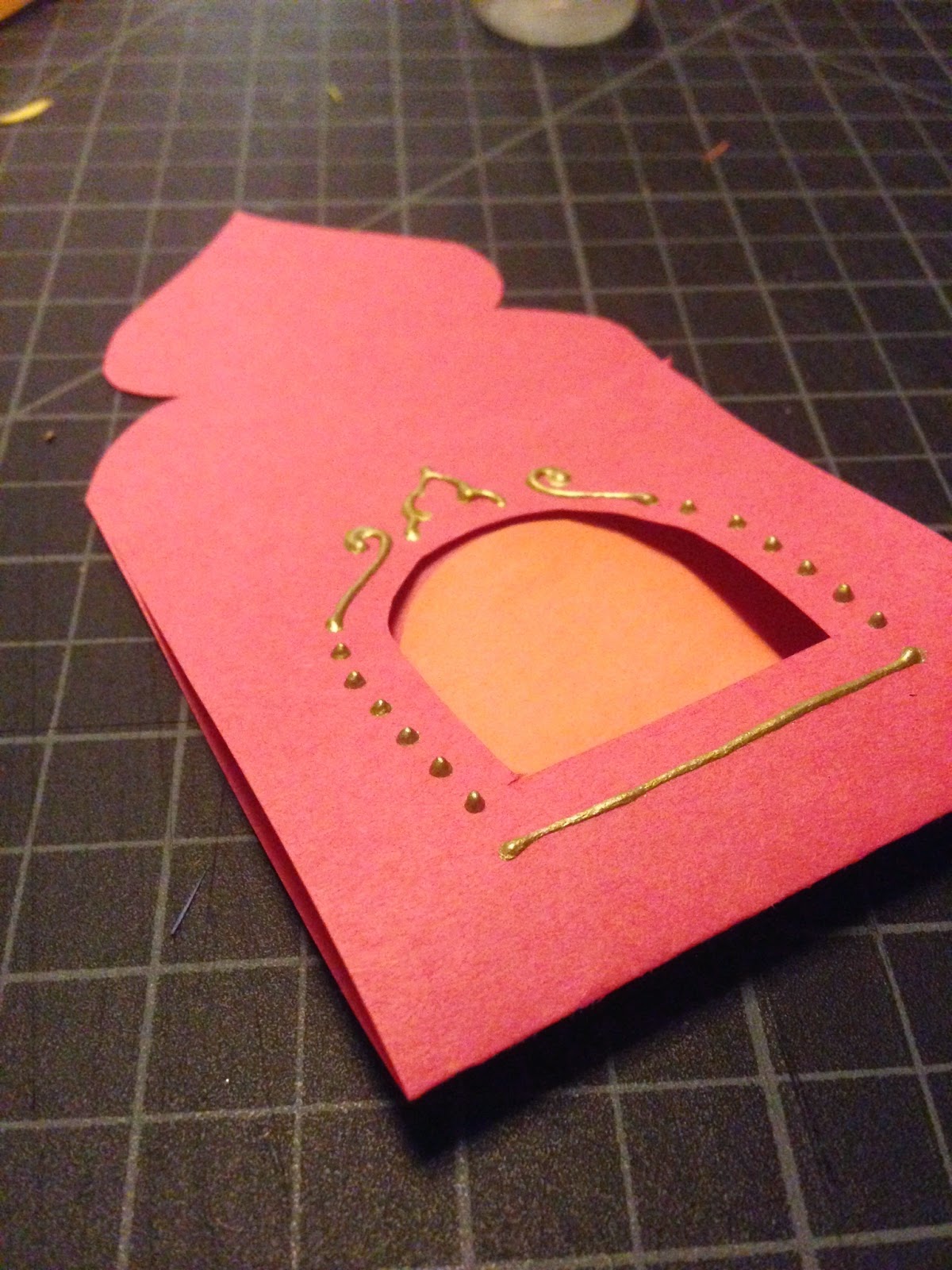 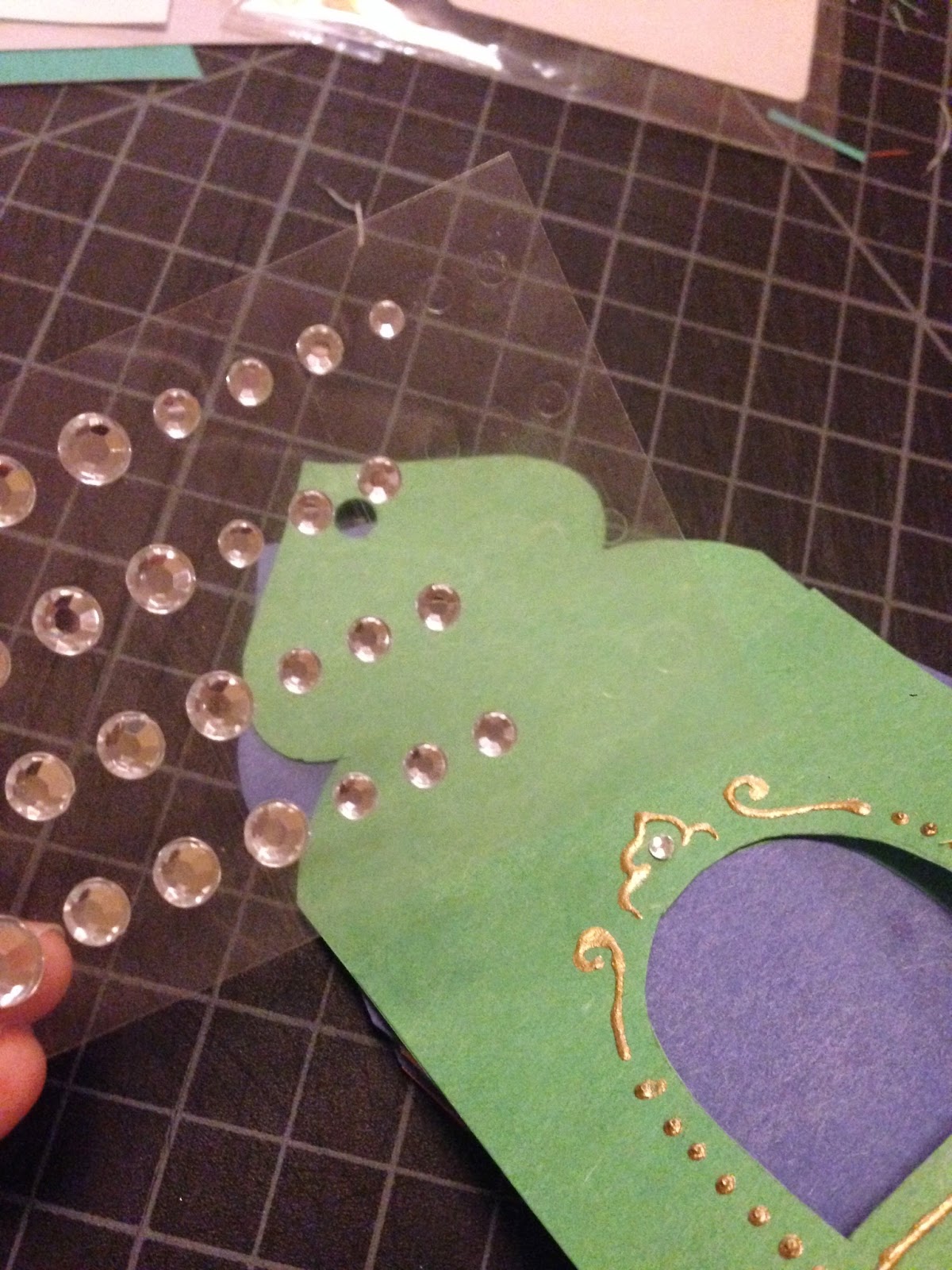 Perfection is key, by the way. Just kidding. Perfection is a farce, my friends, and it's not something you should care about at 12 AM. I didn't.

So, remember those strips of paper I had left over earlier? I cut those into little rectangles, and with a small helping task written on one side of the rectangle, I slipped each one into the sleeve of a mosque with the BLANK side facing out. These are my 'help cards'. Each help card is the same color as the inside of the window of the mosque it goes into. I realize I am complicating things. You don't have to listen to me. 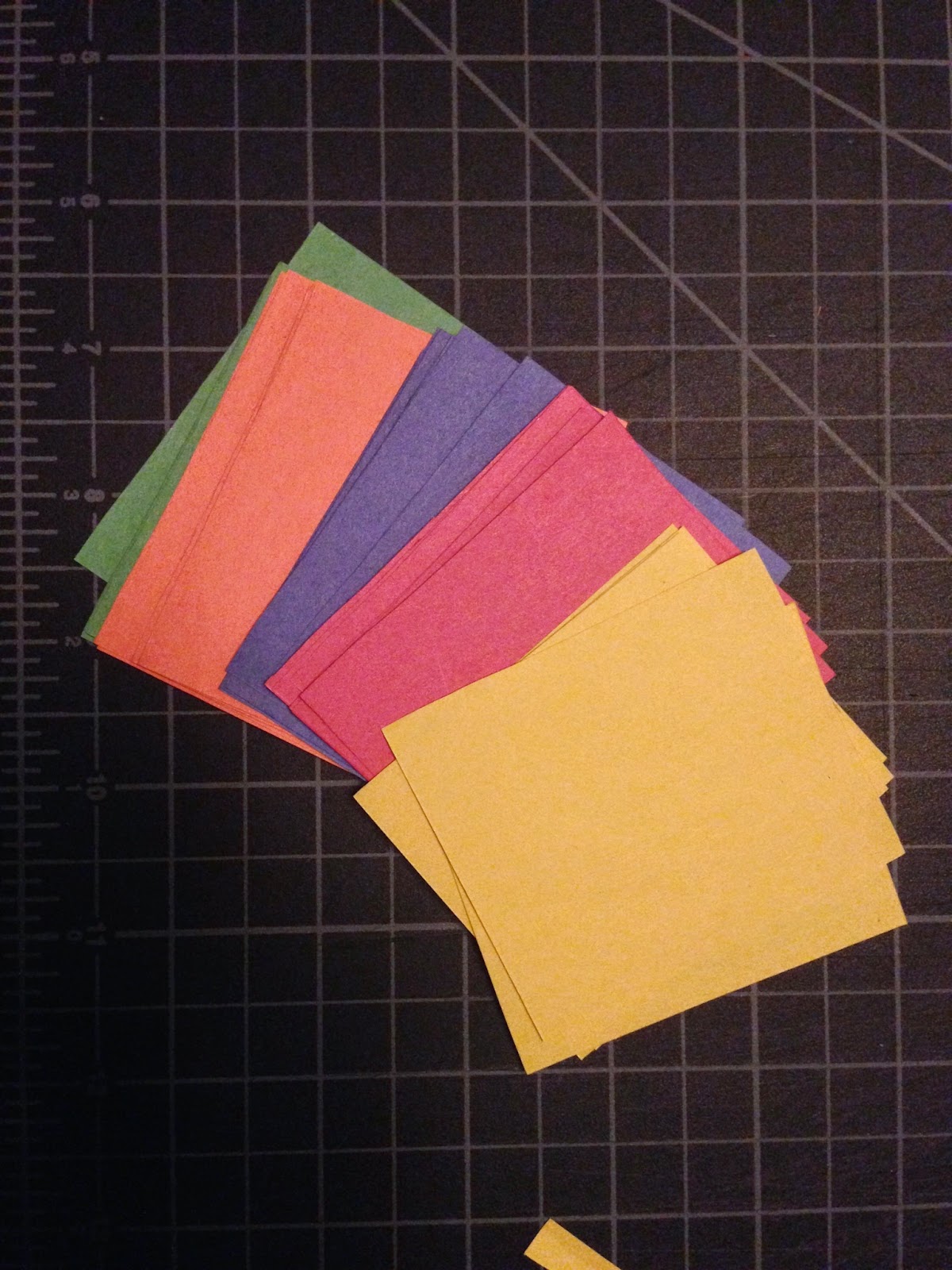 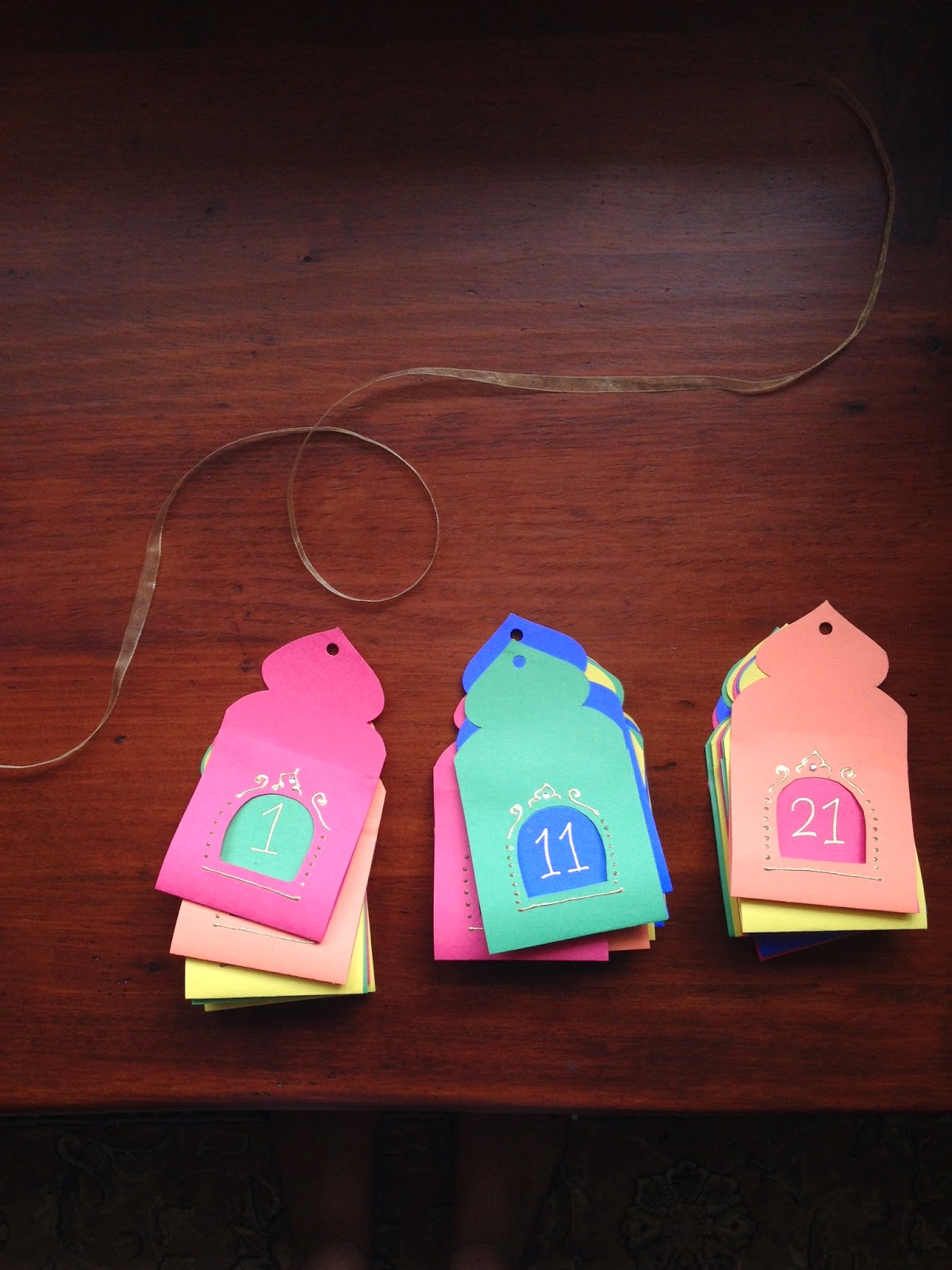 Once the help card was inside the mosque, with the task written on the back, I wrote the numbers from 1-30 into the window on the front of the card with a gold paint pen. The idea is that once you pull out a help card, the mosque window is left blank with no number, so you know what day of Ramadan you're currently on. It's probably a good idea to mention here that I first organized the mosques in the order that I wanted to hang them in, and then numbered them. 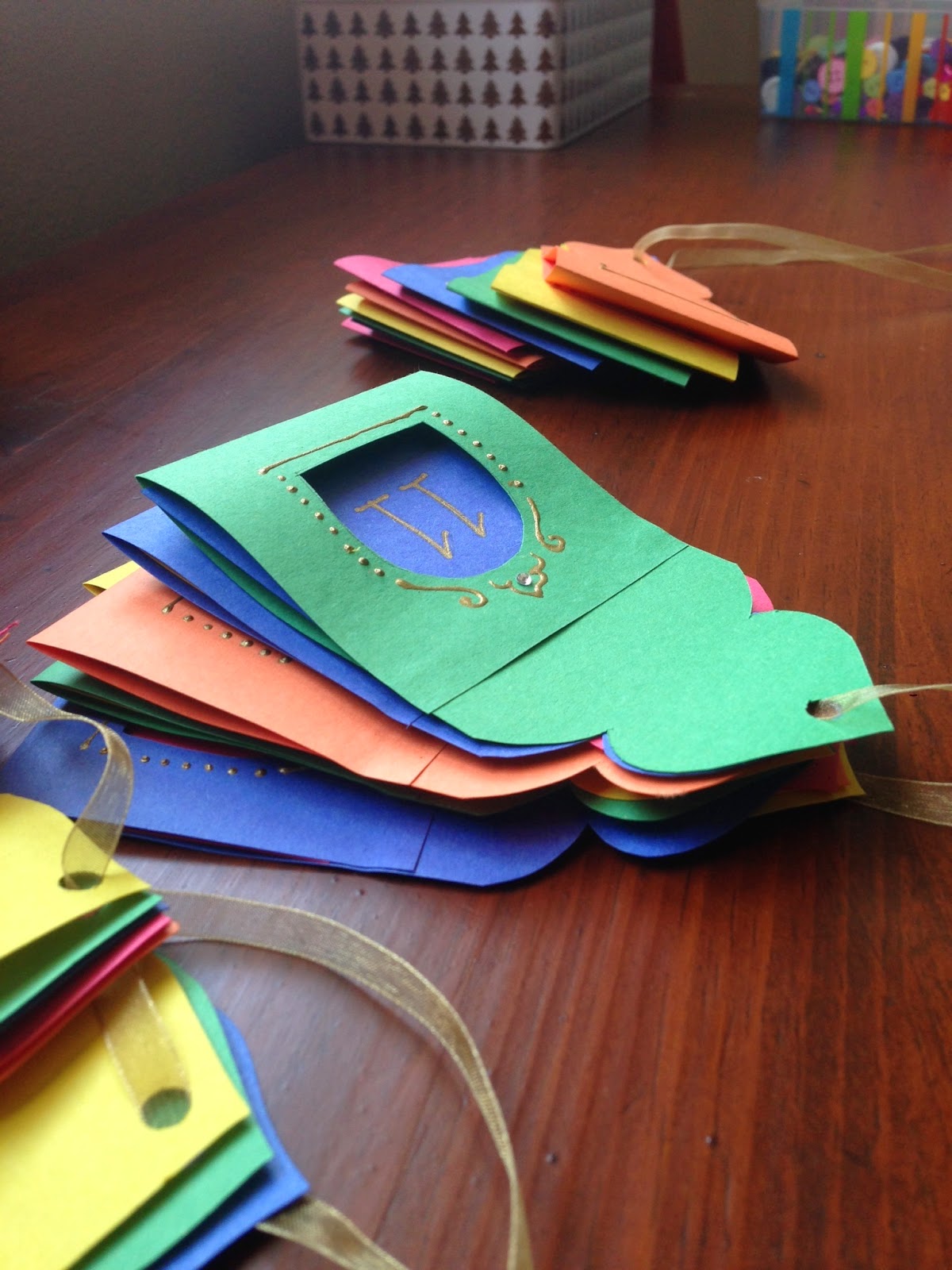 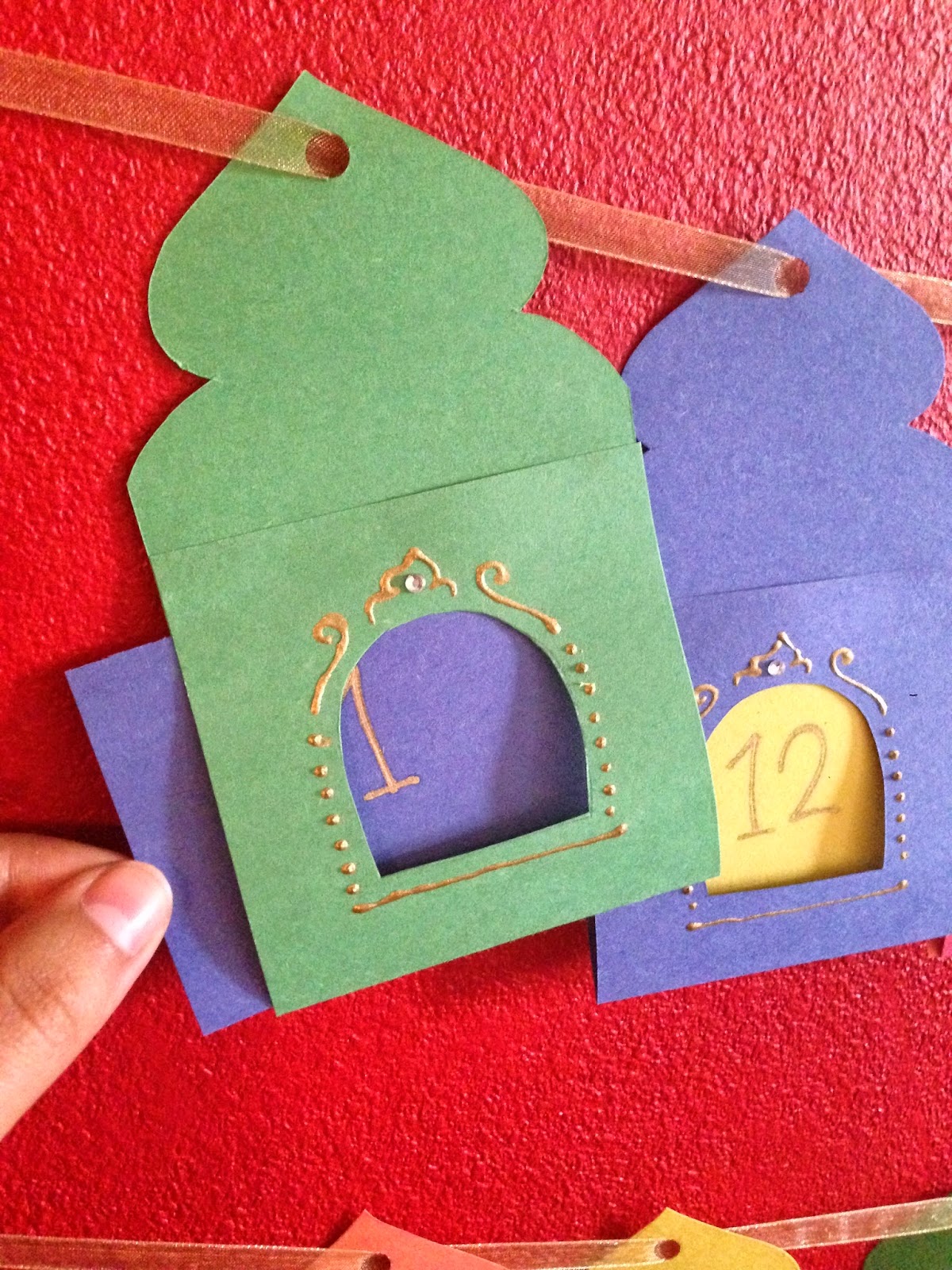 I cut some gold ribbon into three equal lengths, and strung up my mosques. I then proceeded to freak out about centering the whole thing on my wall, but you don't need to know about that...
[Lets not talk about that thermostat thnx] 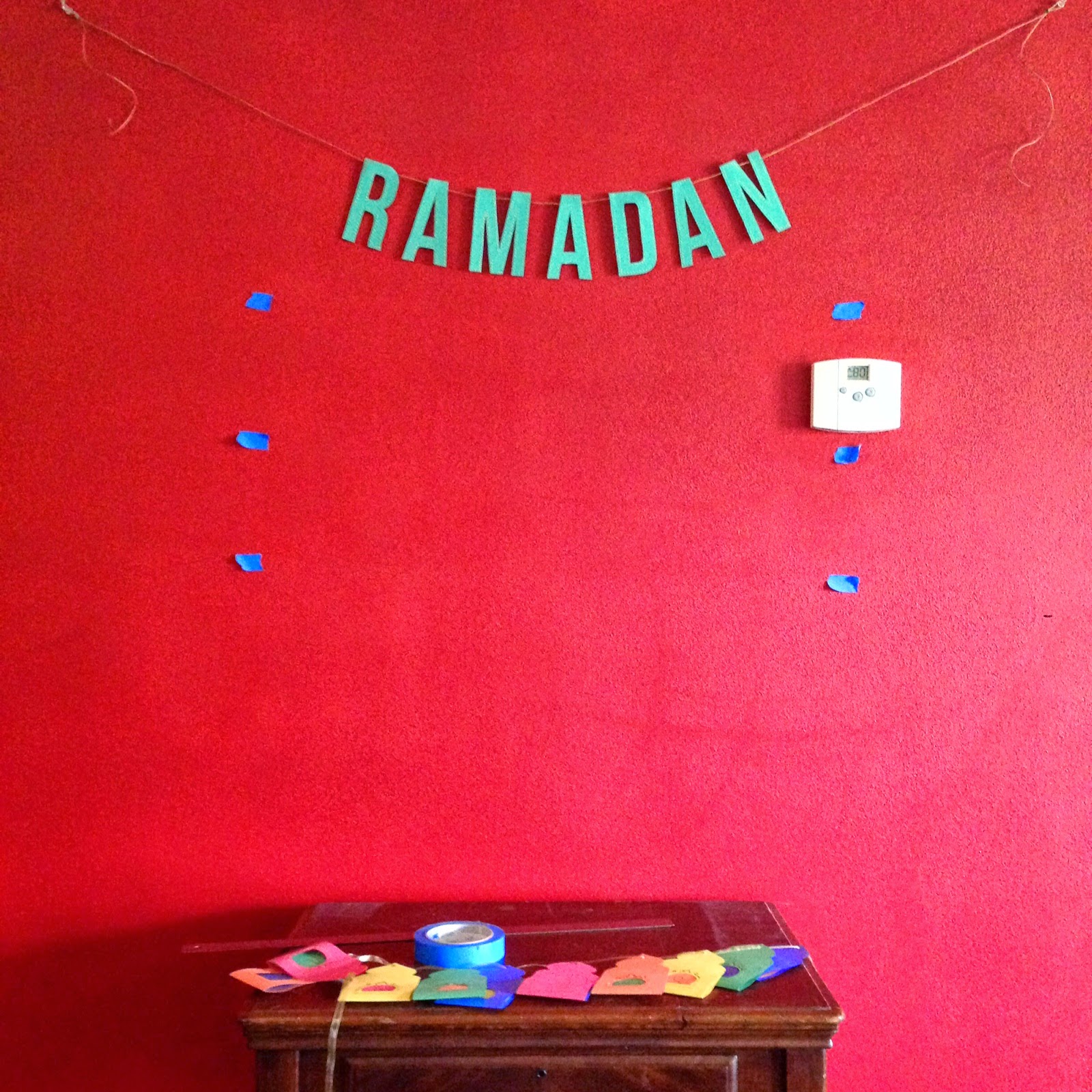 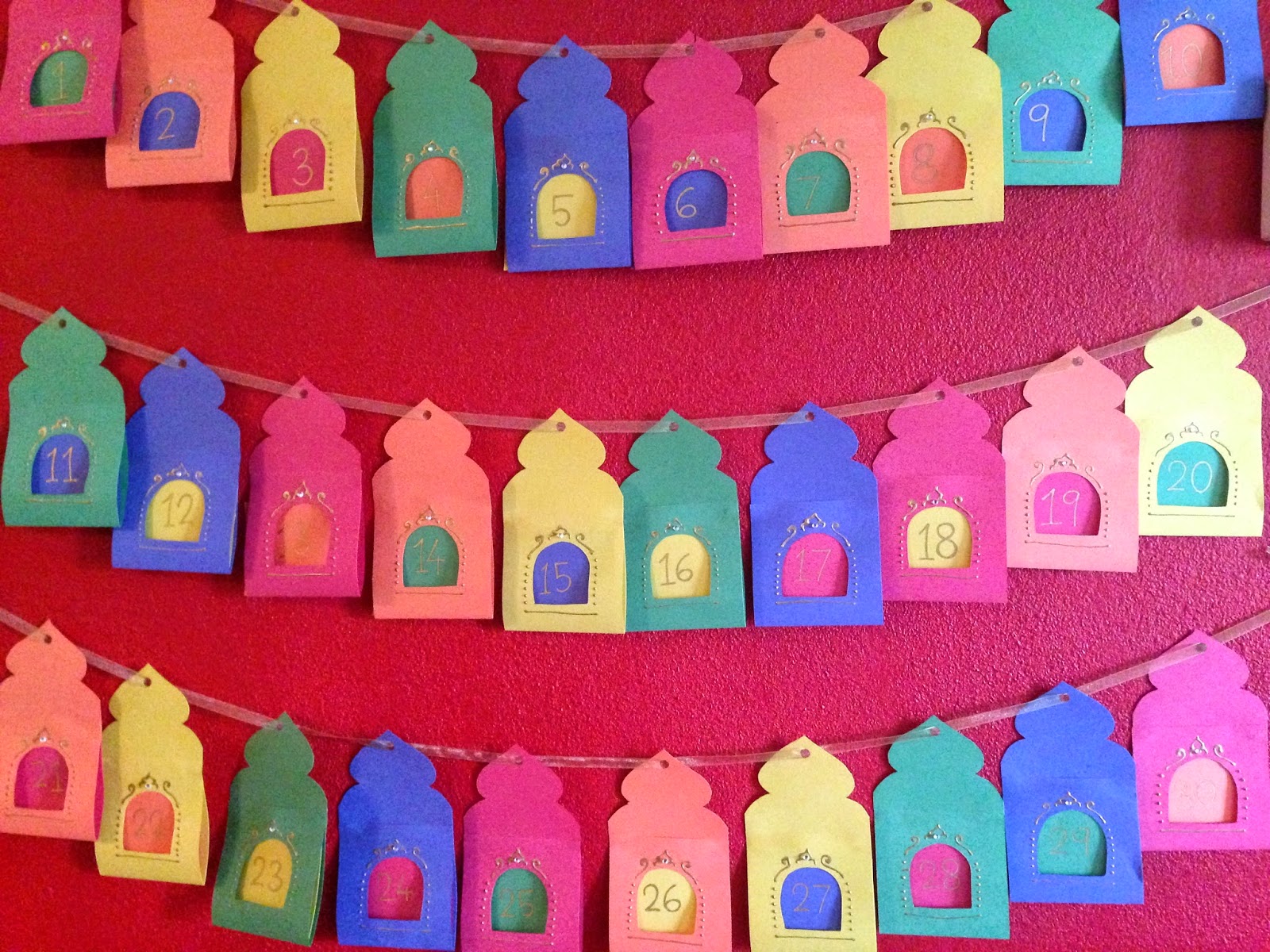 I was going to do one that said 'Ramadan Mubarak' but it was late and I decided I didn't want to do that much work. Here is how I went about making this thing:

I typed RAMADAN on my computer, picked a typeface that I like [Bebas Neue], made it really big and printed it out.

I got rid of two As because I really just needed one shape for all three. I cut the printed paper down so that each letter was on its own piece of paper, and glued the corners of each piece onto green card stock. Using my handy X-acto knife, I cut along the lines of each letter shape. I'm sure there's a more 'careful' way to do this so that your letters are neater, but I didn't want to make my process longer at this point. For the A, I taped down three layers of the card stock with the printed A on top, and cut through all three together. My right hand hates me. 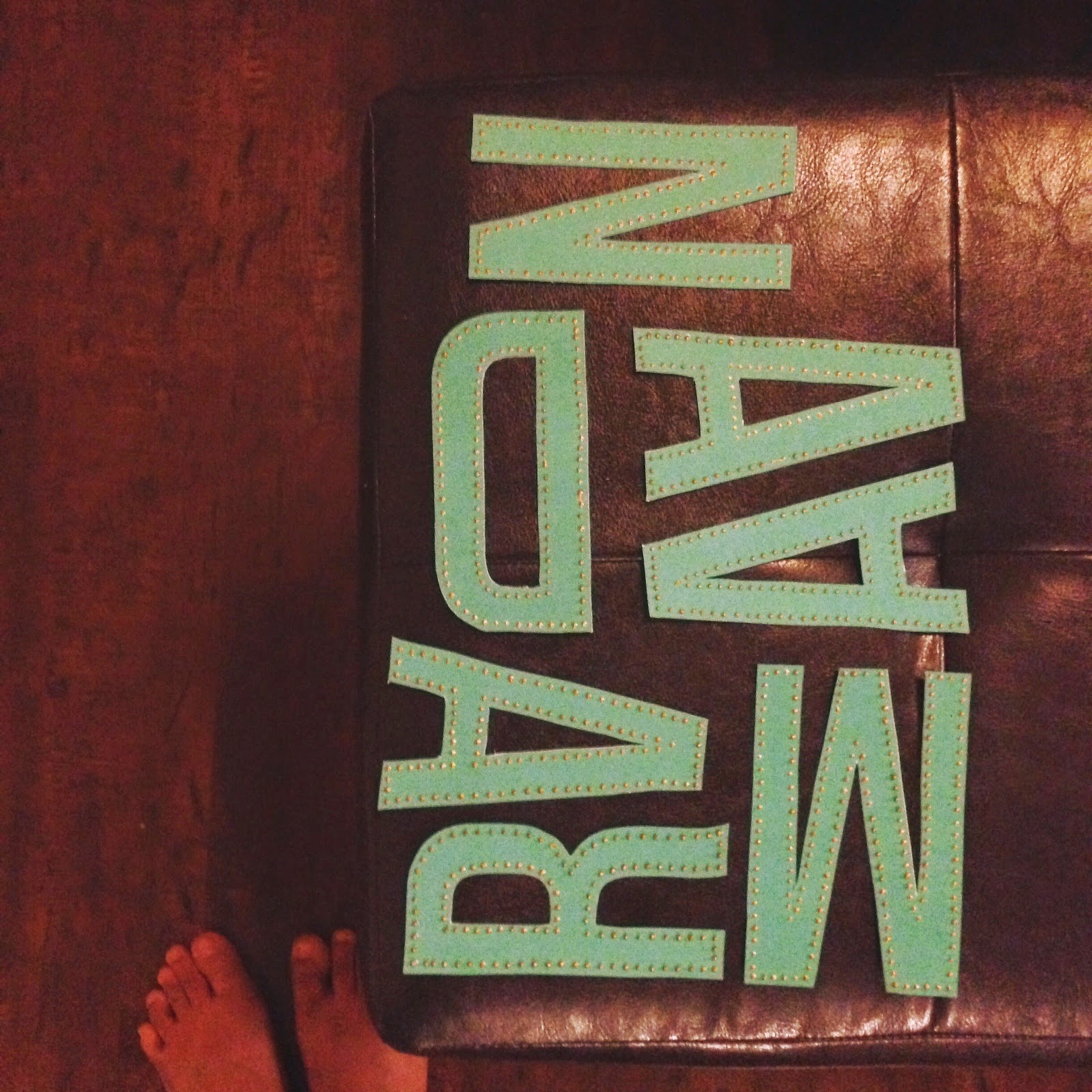 With all the letters cut out, I used the same gold [glass] paint and dotted the edges of each letter. Once that was dry, I laid them all upside down in a row, in the correct order, and glued a length of twine to the back. A smart thing to do would be to get an exact measurement of how long you need the twine to be BEFORE cutting it down and gluing it to the letters, but I'm silly and didn't do that. I ended up having to add on some twine to one end to make it fit and center properly. Oh, centering. 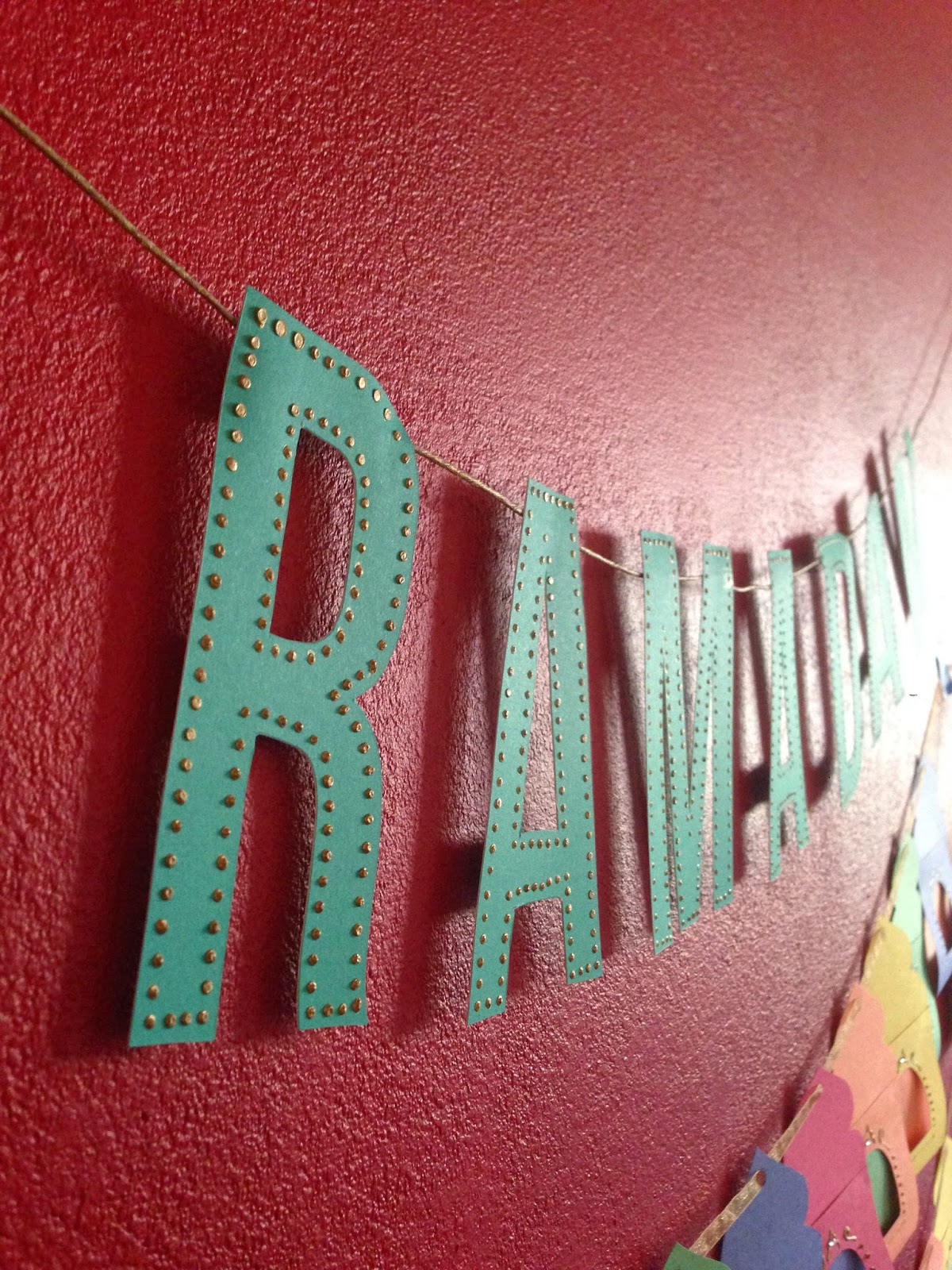 While I was at it, I also made a little Sadaqah jar for the table, using scrap paper from the mosque banner, some twine, and gold paint pen. I like how that turned out. 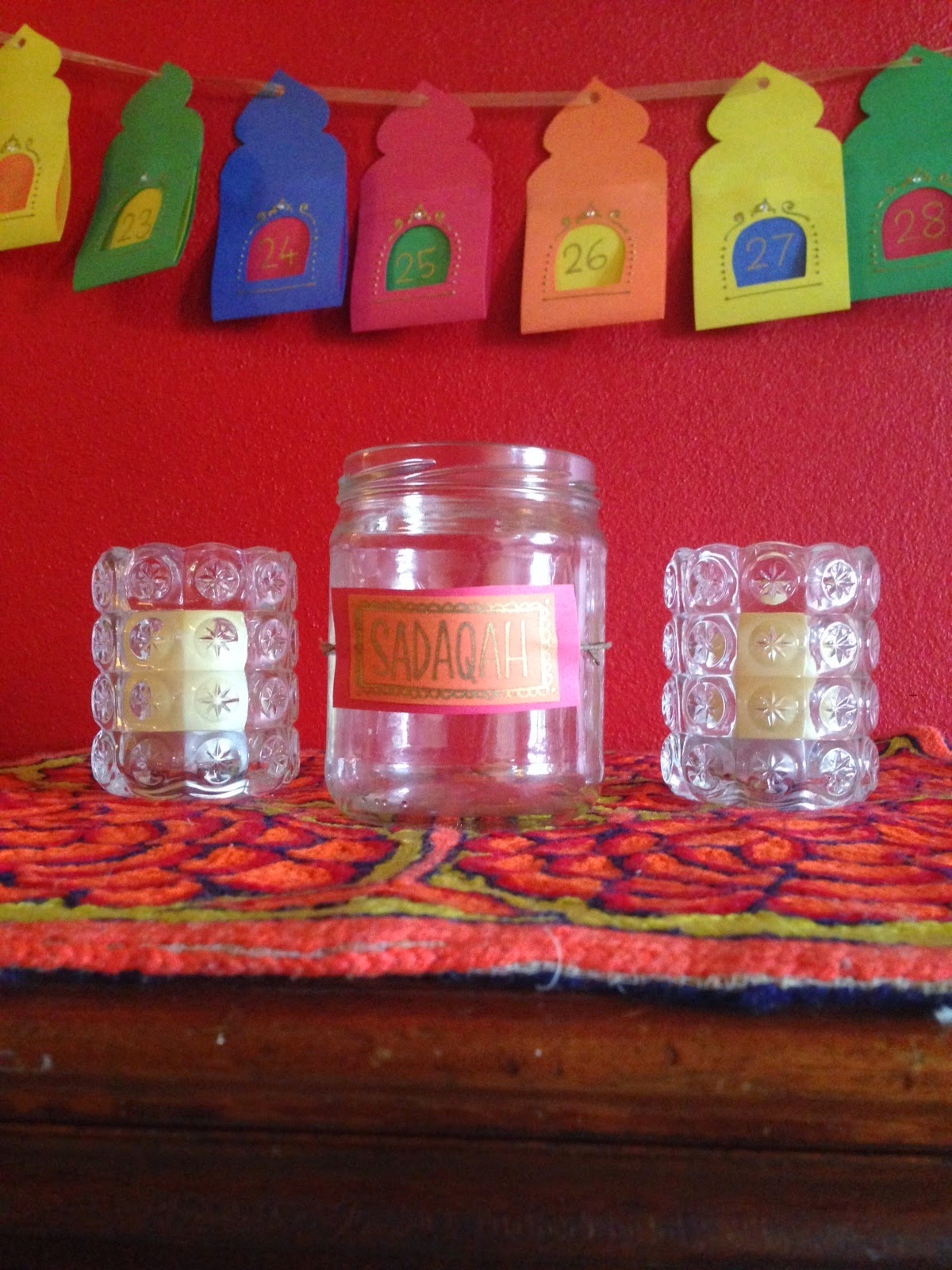 I'm just waiting to get my fairy lights so I can put those up too. Still thinking of doing some more stuff too, just not sure what. I hope you are all having fun decorating your homes and getting the little ones excited for the month of Ramadan! I would love to hear/see your ideas in the comments! I hope I was pretty clear with most of this, but if I missed anything or if you have any questions, let me know.

I need to go clean the rest of my house now. And then do that homework I was talking about.

*Update: I was asked if I have a template for the mosque, so I made one! You can download it here. Thank you so much for appreciating my work.